Danne is 66 years old and has never felt better. Rewind a few years, and it was a very different story. On his 65th birthday, Danne weighed in at 134kg with a dangerously unhealthy body fat content of 47.6 per cent.

He snored, had difficulty breathing, was reliant upon cholesterol and gout tablets, and had problems with mobility and energy.

“I was unable to enjoy many things with my family,” he says. “Especially my eight-year-old daughter.”

Danne’s wife Sanaa and daughter decided enough was enough and gave him a Fitbit bracelet and electronic scales for his birthday. They also gave him what Danne calls a ‘loving threat’ that he would be starting a diet.

He signed up to a popular commercial weight loss program, cutting his daily average calorie intake from 5000 to 1200.

“By the end of those initial six weeks I lost 10 kilograms without an hour of exercise,” he says.

Danne then progressed to the Human Chorionic Gonadatrophin (HCG) diet under the supervision of his GP and a local pharmacist.

“It was the most boring and toughest diet I have ever been on,” he says. “It was five whopping weeks on next-to-nothing food intake, but it’s amazing how fast one’s body adapts.”

Continued dieting led Danne to a loss of 27kg in 14 weeks, still without exercise.

“It is all about food intake and no indulgence,” he says. “All you need is a strong will and a state of mind where you visualise how you will look at the end and how your life will change.”

Danne then began to attend the Dr Anish Singh’s Empire Clinic where he began exercising in the gym three times a week. Within two months he had gained 4.5kg of muscle. 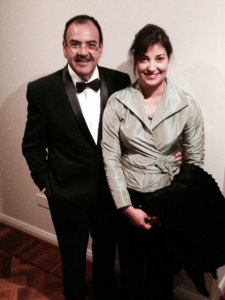 By April, Danne had lost 35kg and reduced his body fat content to 26.3 per cent.

“For the first time in 20 years I could buy clothes in ‘normal’ people’s shops,” he says. “The feeling was great.”

As his cholesterol lowered and energy levels rose, Danne decided it was time to address the sagging skin that resulted from his massive weight loss.

“I did not like to walk around with so much loose skin hanging around after all the effort I made to lose weight,” he said.

“And at my age there are certain areas which will never tighten back no matter how much exercise one does.”

He began to research plastic surgeons and decided to book a neck lift with Dr Patrick Briggs in August 2014.

“I asked advice from my doctors, friends and patients who had had similar procedures, and organised meetings in their surgeries which was very important in the decision-making process,” he says.

Danne says he was extremely pleased with his choice in Dr Briggs and has since booked in for a total body lift in February 2015.

“After the surgery I looked 20 years younger, had bags of self confidence and more determination not to go back again,” he says. “I feel fabulous.”

So fabulous, that Danne decided to renew his wedding vows with Sanaa.

“I renewed my vows to my wife, not only in marriage but also to never go back to being overweight.”

Danne says anyone considering a weight loss program and/or surgery should bite the bullet and start as soon as possible.

“Don’t wait a minute,” he says. “Cosmetic surgery is that final step that will give you the best results.”

If you’d like more information about breast reduction or any procedures, you can contact Dr Patrick Briggs at his clinic  or check out the blogs