Diane had struggled with her weight for years. She always had trouble doing her jeans up at the waist. After having her first child at the age of 23 Diane’s weight started spiralling out of control, and by the time she was 47 years of age Diane reached her maximum weight of 119.3kg. Just 165cm in height, with a Body Mass Index (BMI) of 44, this made Diane morbidly obese. In January of 2013, Diane decided she’d had enough and had her first Sleeve Gastrectomy (Gastric Sleeve) done. By October of that year, Diane had lost 38kg! However, this is where things started to get complicated. After losing the first lot of weight, Diane hit a plateau and no matter what she did couldn’t lose any more weight. She changed diets and dieticians, watched what she ate down to the calorie, and continued with a healthy exercise plan. However, no matter what she did she could just not lose any more weight.

Diane went back to her doctor, who did a few tests and agreed that it did not look or feel right, based on where she should be at this stage after the first Gastric Sleeve procedure. He sent Diane for a barium swallow test and the results came back showing as if the Gastric Sleeve had never been done. After having a volumetric CT scan, Diane’s stomach showed it was doubled in size compared to what it should be! The doctor booked Diane in for a re-sleeve and pulled it tighter. 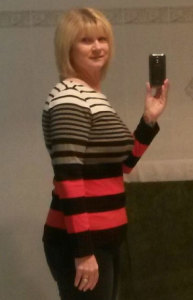 After the surgery, Diane returned to work, hoping all was fixed. However, it was not long before Diane started passing out at work, and vomiting every time she ate something. At the beginning of July this year, Diane found herself back in the doctor’s office and booked in for an endoscopy for the end of July to stretch the fold in her stomach caused by the re-sleeve. The doctor expressed concerns about this surgery advising Diane that there was a chance she could end up with a hole in her stomach. Unfortunately, this is exactly what happened and Diane ended up with a perforation in her upper stomach. She was in a lot of pain and spent a week in hospital on three different antibiotics to clear it up. All the while, Diane kept her spirits up and looked ahead to positive results. These eventually came with Diane losing a further 13.3kg and reaching her goal of 68kg, with a BMI of 25… “normal”!

Diane has recently had surgery with Dr Mark Moore, a respected South Australian plastic surgeon. She had a tummy tuck and breast augmentation on 7 November 2014 and is recovering exceptionally well. Diane had the following to say about her remarkable story.

“The journey has been long, and has had a few twists and turns along the way. It is not an easy way to lose weight, but a tool to help you get to where you have wanted to be for so long. Sometimes things don’t always go to plan and it can be a bit confronting, but trust in your surgeon and it should all work out in the end. I will be back in South Australia in March of next year to have my final plastic surgery… a thigh lift to complete my journey.

Would I do it again, knowing what I know now, and all I have been through? YES! Because without the gastric sleeve, I could never have achieved my dream of living a long and healthy life.”