Hear Hear, It’s All About The Ear

Protruding or misshaped ears can cause severe psychological issues for children, especially when they start attending school where even seemingly innocent comments from the other kids can create feelings of shyness, anxiety, aggressiveness, among other behavioural issues and social phobias. Of course, we would do anything for our kids, and indeed there are many parents who have fixed their children’s ear issues with otoplasty, or ear surgery.

Dr Graham Sellars, one of Sydney’s most experienced and prominent plastic surgeons, based in Wahroonga Sydney NSW, says “otoplasty is a very popular school holiday procedure”. He advises it can be done as early as 2 years of age when the cartilage is still pliable, or more easily able to be shaped; however it is more commonly done in children from the age of four through to about 14. The psychological benefits include the child not having to deal with the cruel schoolyard comments that often come from being different. Getting the surgery done earlier rather than later also means the child’s identity does not include the adjustment required when a part of your appearance is so obviously noticeable and different to others.

The actual procedures involves cutting behind the ear and either removing or remodeling the cartilage to create a better positioning or shape of the ear. As the incisions are usually made behind the ear and in the natural creases of the ear the scars are easily hidden. The surgery can be performed as a day procedure under local anesthetic and sedation or overnight under general anesthetic. Your surgeon will advise the best case scenario for you or your child’s particular situation. 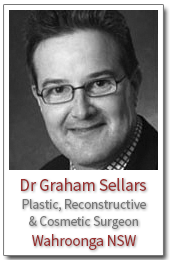 We wanted to ask Dr Sellars how younger children deal with having such a serious operation, both the actual procedure and the recovery afterwards.

“The most common question I get is “when is the best time to have an operation for prominent ears?” Children who are motivated to have the otoplasty manage the procedure better. We perform the procedure from 4 to 44 years of age. I believe the best age to undergo surgery is when it becomes an issue. Some children are very confident and prominent ears are never an issue. Some children undergo surgery before primary school due to very prominent ears and parents who were badly teased for the same problem.

“Many children find it an issue in primary school; some are fine until they reach high school where they then become teased.

“The latest/oldest patient I’ve performed surgery on is a male in his mid forties who was able to hide his prominent ears until his hair began to recede.

“After the surgery, the patient will have a head bandage for the first week, and this is removed 1 week post-op. The patient is then required to wear a headband at night for the next month. There is some discomfort during the first week and patients will have swelling of the ears for a few weeks. There is always great satisfaction on patient’s faces when the bandages are removed and they see their new ears for the first time.”