IGGY AZALEA – SHE’S SO HOT RIGHT NOW, “is it really you?”

We love Iggy Azalea! Why? Well apart from the fact she’s a Byron Bay local girl (Mullumbimby), she’s a rapper and she’s a hot topic in the media at the moment. Iggy (or as the Byron locals may know her “Amethyst Amelia Kelly) moved to the USA at the age of 16 to try her luck as a rapper. She became a household name in the music world when the single “Fancy” from her first album sky-rocketed her to fame. The reason we here at the Hub are paying attention is because of her confidence as a woman, and her openness with admitting she’s had plastic surgery. Not sure why, but it’s still a rare thing to find, especially for someone who is watched and followed by millions of people in a society where plastic surgery procedures are usually kept guarded and secret. We applaud and love Iggy for showing us that you don’t have to be embarrassed or self-conscious about being brave enough to open up about having cosmetic surgery. “If I had a positive experience, why would I want to hide it?” said Iggy on the Project. Yes, we totally agree! 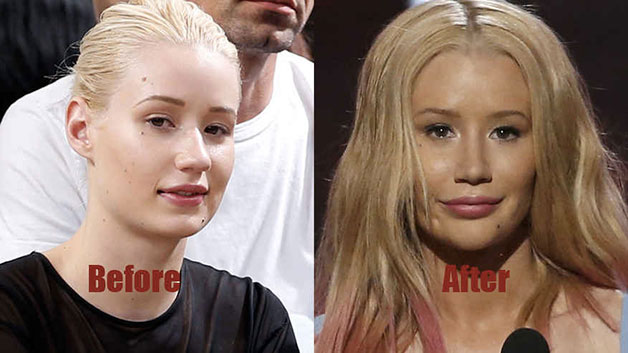 We are also super stoked that Bonds have identified her as a role model for millions of young women. We’re not saying that all young women should rush off and have plastic surgery – we’re highlighting that women should be allowed to want to be happy and confident in their own bodies and if that includes wanting to have a boob job or whatever, then so be it. It is a personal choice and no one else’s right to judge. We live in such a judgmental and visible society, what with social media advertising our every new hair colour and move, and Iggy is a woman standing proud about herself and her choices and this is definitely a good thing.

Each of us is unique and we have our own struggles. Iggy has said she has good days and bad ones but she had a breast augmentation in order to feel better about something that had always been a source of insecurity. Iggy has also had a nose job (rhinoplasty) and again, this has enabled her to look in the mirror and feel comfortable with herself. Now, has she done something to her chin?

The only thing we are worried about is that Iggy may keep going and not know when to stop with surgery enhancements. Often, when stars that are shining so brightly as hers all around the world, there becomes an obsession with gaining that “perfection” they think they need in order to maintain an image that they feel the rest of the world wants. There is a paranoia of sorts that places too much focus on tiny details that the rest of us probably don’t notice, and the ones that do pick these things out are obviously not comfortable with themselves in the first place.

We want to give a big shout out to Iggy and say, you’re beautiful and we love that you’re an advocate for women to be comfortable with their bodies.