LEO (July 23 – August 22) – Whilst last week was a blast, it’s time to face the music – something you’re all too familiar with, my proud Leo. While at times it’s nice to let your hair down and go crazy, it can be very easy to neglect the things that really matter in life, like health, family and friends. It’s nice to see that you’re out mingling in your natural habitat, but remember to maintain a balance and you’ll be pleased with the results.

VIRGO (August 23 – September 22) – Many changes are around the corner for you, dear Virgo, which I’m sure you’ll be happy about due to your love of change…NOT! Yes, it’s true, you’re a creature of habit, but is there anything so wrong with a bit of stability in your life? Whilst you can always be relied upon for being there for a friend in need, maybe the adjective ‘dependable’ and the sign ‘Virgo’ don’t necessarily compliment each other like they once did. Because of the change of events, you’ll finally be putting yourself first for once – and it’s about time! Embrace the new you, Virgo – you’re brilliant.

LIBRA (September 23 – October 22) – Feel like your friendships have been slowly becoming less important in your busy schedule lately? Not to worry, there’s a simple explanation, Libra. You’ve made so many positive changes to your life recently, so seeing as you seem to be on a role, why stop there? It’s time to stop hanging out with those negative friends that only seem to have bad things to say about you or others. You’re better than that, Libra – and you know it.

SCORPIO (October 23 – November 21) – Unlike your usual work hard play hard mentality, it seems you’ve started to become a bit of a work-a-holic, Scorpio. Whether it’s because of a new job offer or another incentive, you have certainly changed your tune, and people are noticing. Whilst it’s good to have a passion for your work, don’t concentrate so hard on making a life that you forget to make a life.

SAGITTARIUS (November 22 – December 21) – Ever the restless entrepreneur, you’re thinking about one thing and one thing only this winter – travel. True to form, you’ve planned it all out in your head down to the smallest detail, and the only thing left to do is make the arrangements. Get out and explore the world Saggy – it was written in the stars!

CAPRICORN (December 22 – January 19) – Watch out Capricorn – on Monday the planets align in a Grand Sextile (six-pointed star configuration). This rare moment in horoscopic history means that it may finally be the moment when Cappy lets their hair down! It’s time for you to stop worrying about others, and start enjoying the life you’ve worked so hard for. There’s no time like the present Capricorn – so get those clubbing moves out of the closet and onto the dance floor!

AQUARIUS (January 20 – February 18) – Whilst you always seem to be the life of the party, Aquarius, there’s no denying that once the party’s over and it’s time to have a serious conversation with someone, the beads of sweat begin to appear. Now that the Grand Sextile has arrived, you’ll feel instantly more at ease in any heated discussions with a friend or colleague. Who knows – maybe showing your serious side may open more doors than you think…

PISCES (February 19 – March 20) – You know more than anyone that it’s been a long winter, Pisces. But it doesn’t mean that you have to abandon your favourite element – water! If you’re near an indoor pool why not go for a dip to blow off some steam…literally. Or, if cash is tight the moment, you can always treat yourself to a nice hot bath with candles and a good read. When struggling to juggle both personal and professional lives, things can often seem overwhelming. However, sometimes all you need is to push pause for an hour or so to regain your momentum…and your sanity! 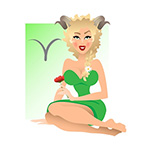 ARIES (March 21 – April 19) – Thanks to the legendary Grand Sextile (seven planets forming a six-pointed star), the world will see a softer side of you this week, Aries. Whilst at time you can seem slightly inconsiderate or unaffected by others feelings, this is simply the hard exterior you like to show to others. This week, finally we can see the soft, caring side of Aries that friends and family adore. Who knows, Aries – this could be the beginning of a whole new side to you.

TAURUS (April 20 – May 20) – There’s no doubt that the Grand Sextile means change, and you’re no exception, Taurus. You’re famous for seeing things in black and white, but from now on, you may be surprising yourself and those close to you with your controversial ideas and ability to empathise with others. Take it in your stride, Taurus – you’re growing up!

GEMINI (May 21 –June 20) – Unfortunately for you, Gemini, the Grand Sextile won’t bring your ever-buzzing brain to a halt. Though nobody would dare doubt your intelligence, they don’t realise how much of a burden it can be when it’s time to switch off. Whilst this can’t be avoided at the moment, and can be a positive if you’re in a highly demanding job, the Sextile will assist you in using your brain power productively, leaving you time out for yourself and your family and friends. My guesses are, by the end of the week you’ll be needing it!

CANCER (June 21 – July 22) – If you’re seeing green, Cancer, don’t be alarmed. It’s not your jealousy getting in the way – it’s the money, honey! Thanks to the shift in planets, the time has finally arrived for you to make some cash, and not a moment too soon. For a while it felt like God had it out for you, but being the strong hard crab that you are, you’ve managed to push through, and now it’s paying off. Did someone say shopping?

Miss-Teek has had a keen interest in astrology and star signs for a very long time, in this life as well as in her past lives. She journeys between Melbourne and Byron Bay (and occasionally to parallel universes) consulting on all things mystical and otherworldly.