Jem always wanted more boobs, and when she realised they weren’t going to grow any more than her AA size, at the age of 25 she started to do some research on breast augmentation. One of the first clinics to come up on her internet travels were The Cosmetic Institute (TCI), and Jem booked herself in. Not everything went smoothly though, and she ended up having to have a revision with WA Plastic Surgeon Dr Mark Hanikeri to fix her capsular contraction. Jem shared her story with us about getting it right the second time around – the importance of after surgery care.

Jem was excited about finally having her breast augmentation and had a bilateral breast augmentation with TCI. It initially seemed to be fine, but then after an injury her left breast swelled up. She went straight back to TCI to have it checked out. “I sustained an injury to my left breast in Feb 2017 and it literally swelled up overnight like a balloon. I went for scans etc, and was told everything was fine – that the scar tissue capsule had just ruptured and to let it heal. Never once did I speak to my surgeon throughout the whole 2 week ordeal, only ever the front desk nurses. I was actually initially told by the radiologist that my implant had ruptured which was incorrect! I later found out can only be confirmed by an MRI not just a regular ultrasound.”

Jem said everything was deemed as fine by TCI and was told to take anti-inflammatories and to contact them if anything else arises. But she was still extremely worried. “I was still experiencing pain at the site of injury, it even felt as though it was just not healing correctly. So in August 2017 I contacted them again. I received a callback from the TCI nurse saying I could set up a Skype call with my surgeon if I liked. I agreed but none of his times matched up with my work roster (they being in Sydney and I in Perth) and she said she would contact me with more times. But I never heard from them again.” Jem said after several further attempts at contacting TCI she gave up. “I was already quite depressed about the fact that it was not even 2 years in and they were ruined.” 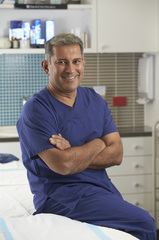 Jem realised she needed to speak to another surgeon to see what needed to be done about her implants and the pain she was experiencing, not to mention she felt they looked deformed. But she knew to do it a lot closer to home this time around. Jem also realised she needed to find a fully qualified and experienced plastic surgeon for her revision surgery. After more research she ended up finding Dr Mark Hanikeri, plastic surgeon based in Subiaco, WA – much closer to home.

However, Jem’s contact with TCI wasn’t over. She says she had to contact them again after her consultation with Dr Hanikeri so she could get her implant information. “I later contacted TCI again after seeing Dr Hanikeri, so I could ask for my implant information so I could have the same implant type replaced. They asked me why I wanted it and I told them that I had to get it fixed, as they did not care to follow up with me or anything. I told them to let my original surgeon know as well, as I had a feeling he had no idea about my situation when I tried to make contact back in August of 2017. They replied saying that they did tell me to contact them if I had any more problems and that I never did! So they were not taking responsibility and shifting the blame to me, and I told them that yes I did, I had proof of trying to contact them, but it didn’t matter now as what’s done is done and I’m getting it fixed now so thanks for nothing! Later that same week I had my previous surgeon try to call me a few time from his personal number and leave voice messages urging me to call him back, but I never did. I I did not want to talk to any of them anymore. It was too late. After that, I never got another email or call from them, even to this day.”

Jem says the staff and aftercare was totally different with Dr Hanikeri and his clinic and her second surgery has been a completely different experience. She also says there are a few other things she learned through the process. “While I felt that both surgeons were great, it was their staff and aftercare that really differed from one another. With TCI it was pretty much – bye see you later we gave you all the handouts now read them and send us the pictures when it says to. The end.

“Whereas Dr Hanikeri’s staff are absolutely brilliant. Their follow up with clients is impeccable, and I have even been offered surgery on my scarring if I ever wanted it, free of charge. Mark is so diligent with his work and takes so much pride in what he does. The aftercare was wonderful, in hospital and out. All of the follow ups that I have had and the care taken to make sure I am happy with the result he has provided. The attitude from Assure Cosmetic and Dr Hanikeri are second to none. No question is to great or to small for them. I would highly recommend Mark and his team.

“My first recovery was very hard, the swelling and stretching was insane. My second surgery recovery was a breeze with hardly any pain whatsoever.” And, best of all, Jem’s second surgery has fixed all her symptoms. “I’ve resumed normal activities again. I feel much more confident as well as I am no longer ‘deformed’.”

Jem says her family and friends are happy that she’s happy and that she now feels in proportion with her hips and overall body. “I always wanted to wear nice clothes and never felt I could fill them out, but now I can and it is still just the best feeling! Especially when you put on something old that you never had boobs in and now you do! Or even just simply putting on a bather top that doesn’t need padding, such a great feeling!”

Jem has one last piece of advice for us all. “I wish I knew before I started my journey that there is a difference between a Cosmetic Surgeon and a Plastic Surgeon. Also, have your surgery close to home, don’t do it overseas or interstate; the aftercare is much easier to manage when your surgeon is close.”

We think Jem’s final results are awesome, but her story is a reminder of the importance of choosing a good surgeon the first time. Breast revisions are way too common and many of them can be avoided.

If you’d like more information on Dr Mark Hanikeri check out the blogs below or head to his listing, or if you’d like to arrange a consultation click here.