One of the main issues facing people seeking gender reassignment from female-to-male is breast surgery. There is a lot of discussion between patients in a fairly close community, so there is a common knowledge about the different types of surgeries that can be undertaken. When I see patients who have had transgender surgery and then come to see me for a second opinion they are often disappointed about the outcome of their surgery and the nature of the scarring. Although my patients tell me they can live with the scarring it seems rather unacceptable to have a massive scar right across the chest wall. 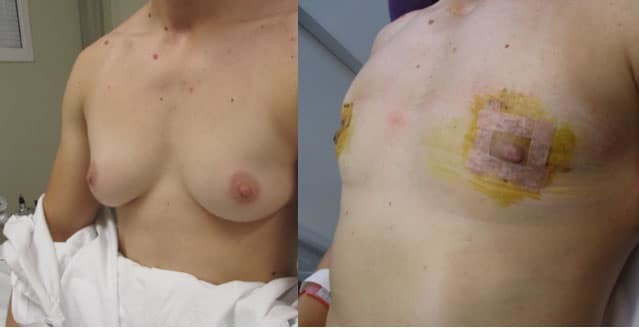 The goal of the surgery should be to minimise scars and where possible to reposition the nipple without using a free nipple graft to ideally keep the nipple sensation and to also add natural appearance to the chest wall with a good contour.

My preferred technique is not to use large scars on the chest such as an inverted t-pattern or a long horizontal incision either across the centre of the chest, through the nipple or underneath the breast where possible avoiding a free nipple graft as the nipple can de-pigment and result in an unduly flat appearance. Even though the areola can hold the nipple itself it sometimes doesn’t take very well and the nipple can be too flat or washed out.

In this situation I prefer to use a technique where I de-epithelialise, which means that I take the skin off all around the areola enough to tighten or cinch the skin in a circular pattern around the areola. I then lift up the bottom of the de-epithelialised section and perform a complete mastectomy through the incision where at the join of the de-epithelialise section and the breast tissue. Once the mastectomy has been performed we use a permanent suture (gortex) to hold the tissues around the areola into a 4.2 diameter size which is even on both sides. The blood supply to the nipple is coming from the skin and the de-epithelialised section this way the whole incision is just around the nipple and there is no further incision added onto the chest wall at all. This has a very pleasing cosmetic result. Immediately afterwards we tape the wound for three months with paper tape to help stop the scar around the nipple from stretching and in these photos I show the pre-operative larger breasts and the immediate result in the first week following the transgender female-male to transition using the peri-areolar incision with no other scars across the chest at all. I like to use a binder to reduce swelling and fluid collection underneath the mastectomy flap and it provides a great way to approach this type of surgery.