After having 3 children that involved long and involved labours, Kim had extensive pelvic organ prolapse which caused her significant physical issues. Kim’s doctor at the time suggested a new product “Vaginal Mesh” would solve all her problems. From the moment she woke up after surgery to have the mesh inserted, Kim was in significant pain and she says it just got worse from there. Kim had pain in her legs, back, belly and couldn’t sit or stand for long and took several months off work. 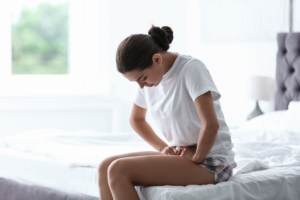 Vaginal Mesh is known to cause debilitating pain for many women and is no longer offered as a solution.

That was just the start of an extremely horrific journey that lasted for years and years and affected Kim’s ability to work, have intimate relations with her partner, pick up her kids and every single part of her life. In constant pain, Kim’s mental health was also seriously affected.

Vaginal Mesh has been recognised as a huge medical disaster. It was reported there were around 4,000 vaginal mesh injuries between 2005 and 2010, and more than 15% of women who were implanted with vaginal mesh suffered vaginal mesh erosion within only 3 months of implantation, causing excruiciating pain. Kim’s is a scary and devastating story that all women need to hear so it doesn’t happen to anyone else. Kim’s honest and raw telling of her story is extremely brave and a must-listen.