Penis Transplant. These two words are enough to grab anyone’s attention. It’s certainly not two words we’ve heard in the same sentence before! Well, it is now.

Performed in South Africa at Cape Town’s Tygerberg Hospital in December 2014, the recipient was a 21 year old male whose penis had been amputated after a failed tribal circumcision three years ago.

South Africa is still a nation where tribal circumcisions mark a boy’s transition to manhood and are often performed without any anaesthesia and with basic tools such as a spear or sharpened rock. Unfortunately, there are many men who continue to die each year from bleeding, infection and other related injuries to a failed circumcision; and there are many others left without a functioning penis, or a penis that has to be amputated in order to save the young man’s life. 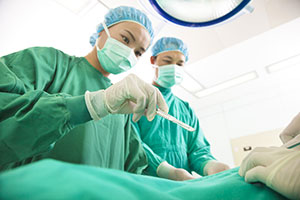 The operation took nine hours and was headed up by surgeon Dr Andre Van Der Merwe and assisted by a huge team of doctors and nurses including Dr Frank Graewe, head of the Division of Plastic Reconstructive Surgery at Stellenbosch University. This was the second time such an operation has been performed, but the first time it has been successful.

Attaching such a sensitive organ involved a lot of very detailed and precise connecting of blood vessels and nerve endings to the existing ones already in the patient’s body.

The recovery time for a fully functioning penis was expected to be two years, however the patient has apparently reported that he has recovered much more quickly and has not only gained urinary function but reproductive too. The patient has also reported renewed feeling to the area and has been able to have erections.

Be reminded that for a transplant such as this to take place, there has to be a donor. It is unusual for someone to specify they are happy for their penis to be a part of what they donate when they die and it is certainly something for all the men out there to consider.

This wonderful news will definitely pave the way for other countries to look at this surgery for not just failed circumcisions, but for those men who have lost their penis from cancer, or other causes or trauma.

Read on for more information about penis surgery.