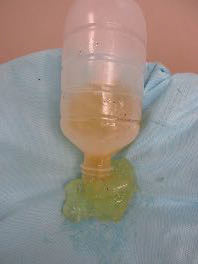 Many breast implants need to be replaced as time goes by. Recently we operated on a woman who has had breast implants in position for 32 years. Commonly these implants are ruptured and have dense calcification around the capsule which makes the implant very hard to the touch. We developed a technique to remove the ruptured gel by using a regular saline bottle attached to a sucker and we can suck the implant out without any gel spillage.

The first photograph shows the ruptured implant being removed from the suction bottle.

The second photograph shows the dense capsule with calcification which makes the implant so hard.

New generation gel implants which are gummy bear or cohesive gel implants have much lower rate of rupture and it is rare to see this dense calcification. Even the new generation implants can rupture and we still use the bottle suction to remove these implants if they need to be replaced. Commonly ruptures start to occur around 10 years and are more common towards the 15 year mark. I like to think of breast implants like motorcars. Eventually things break down and need to be replaced and in 15 years time you probably won’t be driving the same car. It is the same with all medical devices such as hip replacements, knee replacements and pacemakers which need to be changed as time goes by, in the same way as breast implants do.