My ear surgery was done as a 17yo by Dr Jake Lim at Castle Hill Day surgery. I remember that the first time we went to his office I was really nervous, as I had never had any form of operation/surgery before. After the initial consultation with him and speaking to his nurse Catherine, who was incredibly sweet and aided in easing my nerves, I decided to go through with the surgery.

The following visit or two (for some reason I cannot remember how many there were), ensured that I was aware of everything and was certain that this was what I wanted, and that the surgery was booked. Everyone was really helpful with it, I remember being quite picky about it being in the final week of term so that I would have lots of time to recover. After that, all I had to do was wait until the day. I received a call the day before, informing me of all the details of tomorrow (what time I had to be there, when I had to fast, etc.). I recall being quite happy that I could have breakfast and trying to eat as much as I possibly could, I thought I could make up for the fact that I was not allowed to eat anything later on. This did not exactly go plan and I remember complaining about it.

When it came to the surgery itself, the nurses were very understanding of the fact that I absolutely hate needles. They worked with my fear and I was given some “magic cream” that would numb the area and apparently, according to the anaesthesiologist, make him look like Tom Cruise or Zac Efron. I remember laughing at this before going to sleep and waking up hours later, with a nice big bandage around my head. There was a lot of Elastoplasts and tape around my head and underneath my chin. 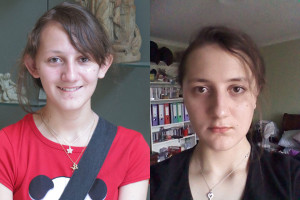 When I slowly became coherent, the nurses helped me change and gave me something to eat. Walking was a new feeling due to the weight on my head! I vaguely remember going home, but the pain I had the next day compensated for that. I cried a couple of times because of the pain, and went through quite a few strong painkillers. Codeine was very useful.

Catherine called a few days later to check up on me and to book when I would get the bandages off. I had to have the phone on speakerphone in a quiet place to hear her! The bandages were so thick! When I finally did get them off, it did not take very long and I was surprised by the amount of bandages there were and the relatively small amount of blood on some of them. I did not look at my reflection until my mum took me to the bathroom to put a headband and beanie on. I was too scared to look initially because of what was said about the bruising. I remember being very shocked at the result. I hardly recognised myself and my hair was really gross!

Being able to finally wash my hair was a relief and nerve-wracking. I was terrified that I was going to pull a stitch, that my ears would revert, or that my ears would actually fall off!! I slept with two headbands and a beanie on for the following six weeks (the beanie was not necessary, but it made me feel more secure). I also had to sleep somewhat upright during that time period. This was kind of hard as I remember constantly waking up initially because I was uncomfortable. I did manage to adjust to it eventually.

I am looking forward to my next appointment with Dr Lim where I will hopefully be told that I can sleep properly now, and that everything is fine. I am also really pleased with the results of the surgery. It was definitely worthwhile.

Rebecca had ear surgery at the age of 17 and likes to share her plastic surgery experience with others who may be considering the same procedure.