As a follow up to our recent story on Jennifer Hawkins and her denial of plastic surgery. We have quite the opposite story with Kaley Cuoco-Sweeting, who plays “Penny” in the hit sitcom “The Big Bang Theory” who considers her boob job as the best decision she ever made in her life. 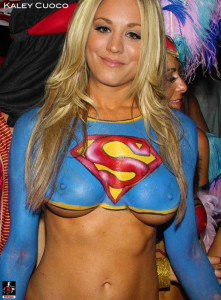 Despite being so young then, Kaley Cuoco had her breast implants at the age of 18 in 2004 while starring the 8 Simple Rules TV show. There has been speculation about the star’s boobs for many years but she only confirmed it with U.S Cosmopolitan Magazine, where she appears on the front cover of the May 2014 edition.

She says she never felt any tinge of regret about the breast augmentation, which she openly confirmed in all bravery during her recent interview with cosmopolitan. Kaley even said it’s the “best decision I ever made”.

Unlike other celebrities who keep denying their cosmetic surgeries, Kaley openly admits that she had gone under the knife to achieve that perfect boob job where she has gained praises for her honesty and bravery.

Kaley says she is obsessed with reading comments about herself on social media. As people say, her boobs look so natural and proportionate. Following her breast implants, in 2005, Kaley became a big hit where she ranked 1 among the 100 Sexiest Women on FHM US, and in 2008, she ranked 21st.

On the 31st December 2013 Kayley married her fiancé, tennis pro Ryan Sweeing after a whirlwind 3 months romance. She says she “absolutely knew” he was the one after their second date. In fact, she says they both knew it was the right thing. We say good on you Kaley for being open and honest with your plastic surgery choices. It’s nice and a welcome change from the usual denial.