It is estimated that over 300,000 women worldwide have received the faulty implants with almost 7,500 women reporting ruptures, 500 of these women from Australia.

The court sentenced PIP founder Jean Claude Mas to four years in prison for aggravated fraud and an $113,000 fine along with a permanent ban from working in the medical services industry or running a company.

Jean-Claude Mas has been dubbed the “the sorcerer’s apprentice of implants” along with four other PIP executives who have also been convicted by the same court in France but given lesser sentences.

After a month-long trial in Marseille in April, the defendants admitted to using the industrial-grade silicone but Mas, who spent eight months in pre-trial detention, denied the company’s implants posed any health risks. 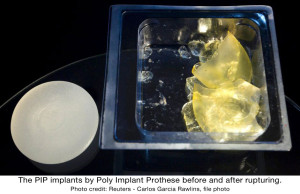 The industrial grade silicon was used in 75 percent of the breast implants by PIP and was saving Mas millions of euros.

Health officials in various countries have supported Mas’ denial confirming that the industrial silicon is not toxic and does not increase the risk of breast cancer.

But this does not exclude the importance of knowing what procedures patients are actually signing up for.

Dr Geoff Lyons from the Australian Society of Plastic Surgeons commented on the importance of early detection in a crisis such as this.

“Matters of criminality are one aspect of this shameful episode but the availability of good old fashioned, reliable, comparable international data would’ve alerted authorities to the problems much earlier,” says the President of the Australian Society of Plastic Surgeons, Dr Geoff Lyons.

“A new Breast Device Registry established in Australia, and being replicated around the world will go a long way to prevent another PIP crisis and will give women the protection they deserve,” says Dr Lyons.

The new Breast Registry in Australia is jointly established by the Australasian Foundation for Plastic Surgery (a collaboration between the Australian and New Zealand plastic surgery peak bodies) in conjunction with Monash University. It removes barriers to participation previously associated with similar Breast Registry projects that failed to work.

There is no cost to the patient, minimal paperwork, and importantly it is an opt-out registry.

The Registry is currently being piloted across Victoria and South Australia, and the pilot has a 95% take-up from women having breast device surgery at the pilot sites.

The pilot is being rolled out more widely across Australia and if a bid for government funding is successful, the registry will be scaled up to a rapid, national roll out to all public and private hospitals and day surgeries over the next two years.

To read more here’s a link to the Press Release from the ASPS.

To find a qualified plastic surgeon in Australia, click here.